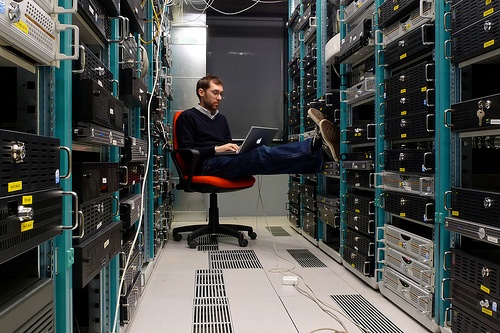 We recently implemented our transparent outbound spam protection solution with a provider of "cloud" or "virtual" hosting services. I thought I would write a blog post anonymously discussing some of the interesting results and observations we can make regarding their outbound spam problem. One day, I hope to form this into a case study, which we will publish on our web site.

The Cloud Provides a Great Platform for Spammers

We normally think of spam as originating from "botnets" of compromised personal computers. This is not a bad assumption to make, because it seems the majority of the world's 300B spam messages do in fact still originated from compromised PCs. But botnets are not the only game in town. In fact, the emergence of cloud hosting services such as Amazon EC2, Rackspace Cloud, and others have provided a powerful, easy to use new platform for spammers to abuse.

A cloud service typically provides a given unit of CPU, hard disk, and network resources at an hourly or monthly rental rate. In practice, this means a Linux machine instance hosted within a virtual machine of some sort. The cloud service provider chops up thousands of physical machines, hard disks, etc.. essentially selling them piecemeal to customers to reap a return on their capital investment. Here's how spammers abuse cloud services:

The blobs in Red indicate steps taken by the spammer, and the consequences of spamming. The blogs in blue indicate the hosting provider's steps. Here's the process in plain English:

First, here is a graph showing the sidereal (i.e. daytime-only) nature of SMTP traffic from an ISP's subscriber network:

This data is from a customer in Asia, so the time zone shifts things a bit to the right of where they would be if they were in our time zone here in Vancouver, Canada.. but you get the idea. People don't generally have their computers turned on at night, and as a result, the spammers don't have access to them to send email. In fact, this customer is located in a developing nation in Asia, where the daytime/night-time difference is even more dramatic than with ISPs in developed countries (because there literally isn't power at night).

Now, let's look at a graph from a cloud hosting network: 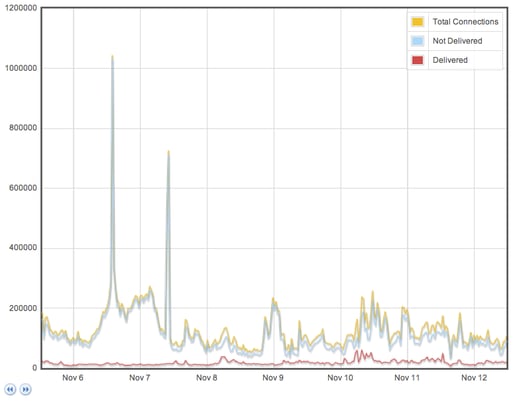 The hosting provider's network sends email 24x7. The spikes in traffic show times when a single machine leveraged the enormous capacity of a cloud hosting instance to establish upwards of 8,000 SMTP connections per second.

Spammers threaten the viability of cloud hosting infrastructure by abusing these services and generating excessive customer support and fraud-mitigation costs. Having now seen a good sample of traffic from cloud hosting networks and comparing that against traffic from ISP networks, I think we can make the following recommendations to cloud hosting providers:

Until then, I hope you enjoyed reading this post and look forward to your comments and questions.